You are here:
September 17, 2020Leave a commentArtikelBy admin 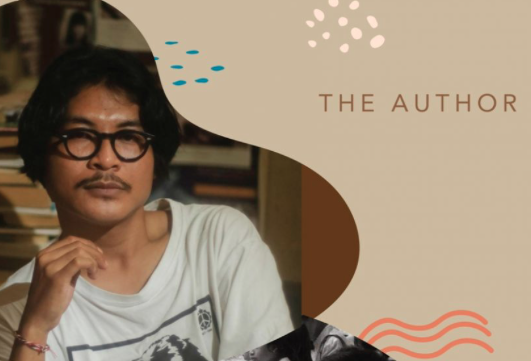 If only the high school boy had not been punished for being late for class, if only he had not gone to the library and met a teacher who handed him a book with a red cover, maybe he would not dream of becoming an author someday.

The moment was a milestone for Juli Sastrawan, a promising author from Bali. The “red book” he read 11 years ago was the first novel in the Harry Potter series. The fiction and the support from his English teacher who was also the library supervisor intrigued him to read more and more. It spurs his imagination and creativity. To channel his energy, Juli created a blog, zine, and two fiction books.

Although he currently pursues his Master’s degree in Literary Studies, Juli still chooses to write fiction over nonfiction. This genre opens up broader space for him to convey his idea about anything from the past, present, future, even the unimaginable. Fiction allows Juli to express critique towards any issue creatively.

His recent novel entitled, “Kulit Kera Piduka,” (2020) discusses complex issues that range from tradition, tourism, violence against women, and feminism. Part of his creative process in finishing this book, Juli was not only read contemporary fiction by various prominent authors but also dug into an old Balinese “traditional” manuscript. He explored the works of John Steinbeck, Laura Santullo, AS Laksana, Intan Paramaditha, and other international writers as well as an anonymous local manuscript namely Lontar Smara Kridalaksana. The lontar speaks about sexuality within the Balinese community in the past, including a recipe for a love potion!

Juli concocts his novel that portrays the life of a young dancer who wishes to pursue her dream whilst resisting patriarchal culture. The book also voices the fragility of the tourism industry most specifically after the Bali Bombing in 2002. “Kulit Kera Piduka” opens a discussion about the future of Bali concerning economics and gender equity. It will be launched in several cities in Indonesia and will be discussed at the book launch session at Kembali 2020: a project created by the team of Ubud Writers and Readers Festival.

Among those wonderful plans, Juli told The Phala that another thing that he grateful for is his encounter with his favorite teacher in high school, Mrs. Made Artini. Knowing that her best student just published a new book, she contacted Juli to tell how proud she is. The teacher became one of the first readers of his fiction. This heartwarming story reminds us of how important literacy is, and maybe that is why Juli also dedicates himself to be a librarian at the street library he founded years ago.